By Kurtis Judd, Member-at-Large for the GCI 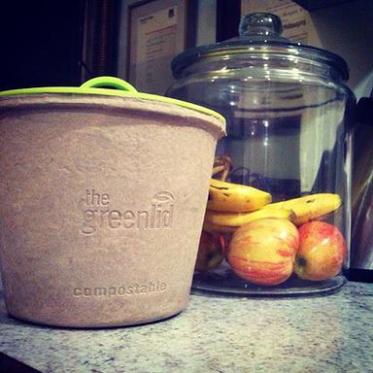 Edit (February 2015): We, the Green Chemistry Initiative, are not associated with this product, but we do think that it’s a great option for household composting. If you’re looking for product information about The Greenlid, including where to purchase one for yourself, please visit www.thegreenlid.ca. Thanks!

Despite its many benefits, composting has not become the fixture that recycling has in Canadian homes. Walk by most subdivisions in Ontario on garbage day and you’ll see a blue box at the end of almost every driveway, but the green bin is a less frequent sight. According to Statistics Canada, in 2011, 61% of Canadian households composted their organic waste in some form. This is up from 39% in 1994, but just by my general perceptions, which are based on the practices of friends and family, we can do better.

I’ve had the conversation before, and many people seem to understand the importance of composting, but either aren’t sure how best to do it, or have tried it, and grew tired of dealing with the rotting mess in their kitchen that caused a fruit fly infestation, and left a rancid container to clean each time it was emptied. In apartments especially composting can be quite inconvenient, and this is enough to make some people not even bother.

More people will compost if we can eliminate some of these inconveniences with sound engineering, and University of Toronto alumni members Morgan Wyatt and Jackson Wyatt are attempting to do just that with The Greenlid project. Morgan received his HBSc at U of T, while Jackson is an Innis College graduate. They have designed a water-resistant, fully compostable container made of post-consumer moulded pulp, about the size of a KFC bucket. It comes with a reusable lid (the Greenlid), and compostable lids for disposing of the container in a green bin. The water resistance is a huge key to the design, as it leaves very little mess to deal with and may be just what people need to convince them to compost more frequently. For $60, you can buy a package that includes 24 containers and one reusable Greenlid, a quantity which should last about a year. This price may still be a little steep, but the product is still new, so there may be room for that price to come down as the manufacturing process is better understood. [Edit (February 2015): this pricing is now out of date, please visit www.thegreenlid.ca for the latest pricing information.]

I asked the designers what their biggest challenge was in designing The Greenlid via their website, and Morgan Wyatt responded quickly. He said coming from an academic background, where research is easy, navigating the manufacturing world was difficult. “With manufacturers, there aren’t the same types of online resources, and there is a lot more direct interaction to find the right partner,” he said.

Using Kickstarter, Morgan and Jackson reached their pledge goal of $25,000 on March 16, 2014 and will be sending the first batch of Greenlid packages out to pledge donors in the near future. They will also be pitching The Greenlid on CBC’s popular show Dragon’s Den on April 11 (set to air next season). For more information about The Greenlid visit their website at www.thegreenlid.ca, or check out some of the cool videos on their YouTube channel. Anything to get more people composting and diverting waste from landfills is a positive change, so if you have any friends or family who have decided to give up on composting, let them know about The Greenlid.

By Melanie Mastronardi, Chair for the GCI and Laura Reyes, Secretary for the GCI

2. Atom Economy: Synthetic methods should be designed to maximize the incorporation of all materials used in the process into the final product.

Atom Economy, the 2nd principle of green chemistry, comes down to preventing waste on a molecular level. It is an example of a green chemistry metric, which helps us understand the efficiency of a reaction. The equation for atom economy, shown below, essentially tells us the percentage of atoms that end up in the desired reaction product compared to how many atoms are put into the reaction. The higher the atom economy the better, since any atoms that are not incorporated into the final product are considered wasted.

In the GCI’s second video, Brian and Melanie outlined the concept of atom economy by comparing two different synthetic methods for making the over-the-counter drug ibuprofen.

As a supplement to the video, here we show how we did the atom economy calculations: 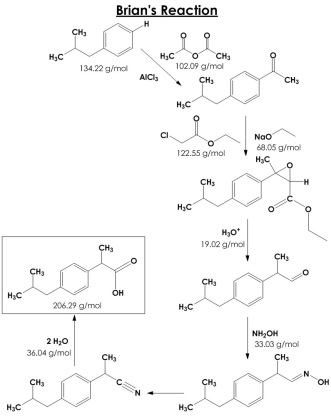 The % atom economy is calculated using the molar mass values indicated for each molecule in the reactions schemes above, excluding catalysts since they can be reused and therefore do not count towards a reaction’s atom economy. The atom economy for Brian’s reaction is determined as follows:

For Melanie’s reaction, the atom economy calculation looks like this:

It’s clear through these two calculations that the new method for making ibuprofen, shown by Melanie, is much more atom economical at 77%, compared to 40% for the old method shown by Brian. Another way to think of this is that previously, 60% of the reagents used in the making of ibuprofen were wasted, but this was improved to only 23% being wasted. On an industrial scale, that’s a huge difference!

In the video, Melanie also explains that in the industrial process for her reaction, the excess acetic acid by-product that is formed ends up getting sold for other purposes, meaning that it doesn’t go to waste, so her % atom economy essentially ends up being 100%.

Be sure to also check out all of the videos in our campaign on our YouTube channel and keep an eye out for those to come!