By Nadine Borduas, Member-at-Large for the GCI

If you happen to be visiting the Davenport Wing in the Department of Chemistry at U of T, you will notice along the side of each fumehood a ruler with hues of orange and grey with thumbs pointing up and down. Why? Well, because the fumehoods in Davenport are variable-flow fumehoods! In other words, the flow through the fumehood is dictated by the sash height. The higher the sash → the higher the flow → the higher the energy consumption → the lower the thumb. It also implies that if everyone had their fumehoods wide open, the energy consumption would actually exceed the energy of the constant-flow fumehoods in Lash Miller and invalidate the variable-flow technology as a green alternative. So, how did the GCI intervene to help ensure that variable-flow fumehoods were being kept at optimal heights? 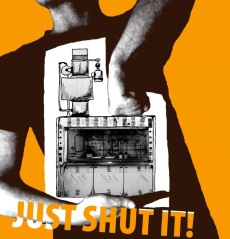 We launched an ongoing “Shut It” campaign to encourage optimal fumehood sash heights!

Back in 2008, the Sustainability Office (SO) at U of T had run a campaign to “Just Shut It”. The campaign was launched to minimize the energy consumption of the variable-flow fumehoods in the Davenport Wing. Over the course of approximately a year and a half, SO ambassadors inspected the fumehoods and rewarded complying students.

There are two ways to comply: 1) if you’re not at your fumehood, it should be shut below 3 inches, and 2) if you are working at your fumehood, its height shouldn’t exceed 14 inches. The SO team analyzed the data and published the result of the campaign in the International Journal of Sustainability in Higher Education. Pretty impressive research!

What is most notable in this article, in my opinion, is a graph showing the compliance percentage over time. The sash height compliance during the campaign was about 80%, but eight months later, termed post-campaign, it was back down to 20%! The lack of compliance after the campaign may be due to the lack of incentives and to the quick turnaround of students in the department. So the GCI, a sustainable group of students that will hopefully be around for years to come, decided to launch a campaign, where you would have no “post-campaign” syndrome and consequently maintain high levels of energy savings.

With the help of GCI inspectors (Peter, Ian, Christine, Ran, and myself), we toured the Davenport Wing from July to September, stamping smiley faces on complying fumehoods. Kai Wan form the Morris Group was awarded a Tim Horton’s gift card for having perfect compliance over the fifteen inspections, and the Zamble Group won a free pizza lunch for having the best compliance on a group basis.

We hope the organic, bio-organic, and inorganic students of the Davenport Wing enjoyed the challenge and will continue to “just shut it”. Stay tuned for the continuation of this campaign in 2015 as well!

By Nadine Borduas, Member-at-Large for the GCI

It’s a humongous issue. It affects every single person on Earth. It has deadly consequences. It’s our fault.

Why, then, are so many idle? Perhaps because it requires significant changes in the current lifestyles of billions of people. The challenge is to completely move away from fossil fuels and move towards sustainable sources of energy and raw materials as quickly as possible. As chemists, we have an important role to play in this transition. There’s active research worldwide to produce fine chemicals from renewable sources and to become completely independent from petroleum based chemicals.

Because climate change is such a giant, complex and long term problem, how do we, as individuals (and chemists), make concrete contributions to address climate change? One proactive group at U of T, Toronto350.org, is attempting to make a difference. This group of volunteers recently drafted a divestment campaign to encourage U of T to sell its current investments in fossil fuel companies.

Why do I strongly support this campaign? It’s simple math. In order to avoid a 2oC increase in global average temperatures by the end of the century, which would destabilize the climate with potential for catastrophic consequences, we must emit no more than 565 gigatonnes of CO2 in the future. Burning the world’s proven reserve would emit 2795 gigatonnes of CO2. 2795 > 565!!! We therefore cannot afford to risk burning the worlds’ proven oil, coal and gas reserves. We must stop taking buried carbon out of the ground now (well yesterday…). U of T can play a leading role in climate change mitigation by cancelling its investments in fossil fuel companies. The divestment document outlines why it is in U of T’s best interest to divest for ethical and long term financial reasons. First, by divesting, U of T will become a leader in preventing climate catastrophe by helping halt the fossil fuel industry expansion. Diverting investments towards clean energy sources are necessary to make the required rapid transition away from fossil fuels. Second, since most of the fossil fuel is too dangerous to burn, there is a financial risk that stock values will fall and that investors will lose huge sums of money. Finally, social and political change can influence policy. U of T will help direct money far away from fossil fuels and even further from climate disaster.

The U of T divestment campaign is not unique in North America or around the world. Look at the quickly growing number of institutions, including several cities on the west coast and elsewhere, which have already committed to divesting from fossil fuels: http://gofossilfree.org/commitments/

My main message is this: endorse the “U of T divestment brief” at http://toronto350.org/, to fight climate change right here, right now. (And if you’re not a U of T student, staff or faculty member, check if there is a divestment campaign at your institution or start your own!)